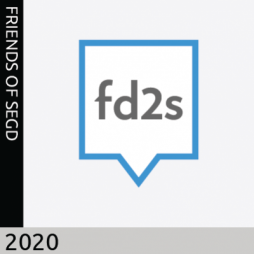 Steven Stamper, one of the founders of fd2s in 1985, currently leads the team as it addresses critical strategic and technical issues related to wayfinding, orientation, and placemaking in the environment. In addition, Stamper is the managing principal of the firm currently responsible for the financial and administrative aspects of the firm’s daily operations, and plays a key role in decisions regarding the firm’s strategic direction.

Steven Stamper is a past President of the SEGD, Stamper chaired the 2006 SEGD Design Awards, co-chaired the SEGD 2008 Conference and participated as a juror for the 2010 AIGA 365 | Design Effectiveness Competition. Steven Stamper is credited with the development of the industry standard Grade II Braille digital font system.

Steven Stamper's firm fd2s works around the world in places like the Kingdom of Saudi Arabia, Egypt, United Arab Emirates, China, Japan, Poland, Bulgaria, Slovakia, Ukraine, the United Kingdom, and Brazil, as well as throughout the United States from their headquarters in the creative and technology hub of Austin, Texas.

A Strong and Expanding SEGD Community

The 2015 SEGD Conference: Experience Chicago is over and according to most of the attendees the staff came into contact with, this one was the best, one of the best, awesome, fantastic--you name the adjective; people seemed to really enjoy it. Chicago delivered incredible sunny days, riverboat tours of the city's architecture, and receptions out on the river walk. All these city-based activities provided great opportunities for people to get to know each other and connect.