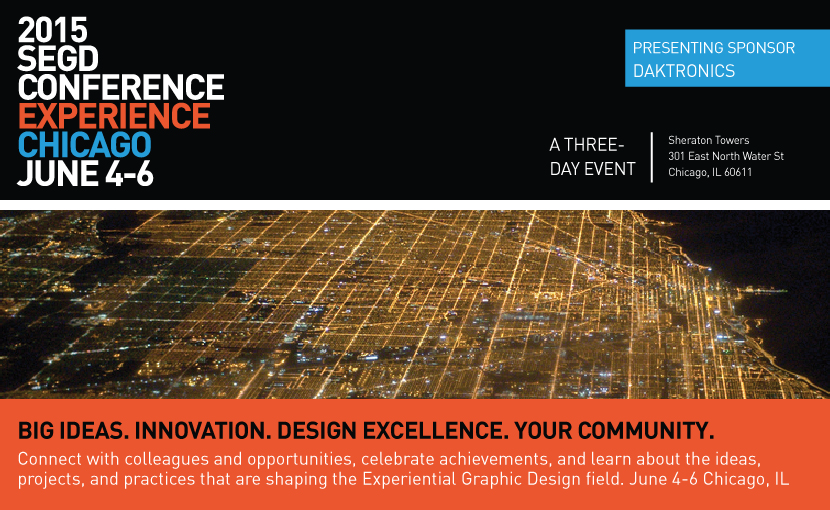 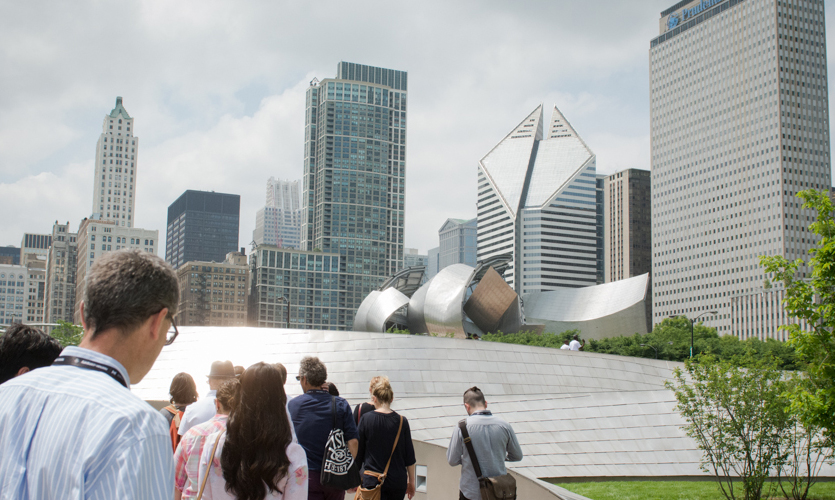 Participants at the 2015 SEGD Conference in Chicago last week focused on possibilities—from data science and quantitative research to new digital technologies, new materials, and new collaborations that will impact XGD practice in the coming years.

This is really the event that I count on for getting inspired and rejuvenated for the year,” says Edmund Li, Reich + Petch.  “It’s been a great conference.”

Participants at the 2015 SEGD Conference in Chicago last week focused on possibilities—from data science and quantitative research to new digital technologies, new materials, and new collaborations that will impact XGD practice in the coming years.

This is really the event that I count on for getting inspired and rejuvenated for the year,” says Edmund Li, Reich + Petch.  “It’s been a great conference.”

Meet Your Makers at the 2015 SEGD Conference NEXPO

The difference between a good project and a great one is having the right partners on your team. NEXPO is the day-long industry supplier and maker exhibition during the 2015 SEGD Conference: Experience Chicago June 4-6. Looking for new fabricators to help bring your ideas into reality? Need to research ADA signage or sustainable processes for your next project? Whether you’re looking for collaboration, information, or inspiration, NEXPO is the right place for you!

There’s still time to register for the full conferenceJune 4-6 in Chicago! Or you can also get a one-day NEXPO pass!

Get the Most Out of Your Conference Experience

Investigate the area. Spend a couple minutes of quality time with google maps and explore the local dining options, places to pick up necessities and points of interest.

Review your schedule. Take a look at the agenda again, and see what tours and events you’ve signed up for. Decide what sessions you definitely do not want to miss, and which ones you are low priority for you.

For the first time ever this year, one in eight participants at the SEGD Conference will be a student!

SEGD is already experiencing record membership highs, and this influx of student members just adds to the wave of excitement building in the organization in anticipation of the conference June 4-6 in Chicago.

Feeling thirsty and adventurous? After all, your evenings are your own at the SEGD Conference, so why not take advantage?

In the spirit of entropy, and an urge to explore (did someone say xplore?), I present to you a few random (but really fun-sounding) ideas for your albeit limited free time during the 2015 SEGD Conference:

Pushing the Boundaries with Nik Hafermaas

Creative risk-taking in Media, Technology, and Space. When he’s not running the graphic design department at Art Center College of Design, Nik Hafermaas is creating new ways to combine digital interactive media, high-tech materials, and architecture through his studio Ueberall. He says there is no better place for innovation—and risk-taking—than XGD.

Candidate Lutz - Man of the People

Chicago – The late-night crowd at hot dog stand Weiner’s Circle can be a bit boisterous, something that would intimidate most people. But Candidate John Lutz seems to find nourishment – literal and political – there.

“Design is about process and community, not products.”

Tanner Woodford, co-founder of the Chicago Design Museum and one of Newcity’s Annual Design 50 for 2015, is an irrepressible cheerleader for his city and its design heritage. He says design is about process and community, not products. And he wants to share a few Second City secrets you probably don't know yet. Tanner will open the 2015 SEGD Conference: Experience ChicagoJune 4-6. Join him there!

Co-working spaces are popping up all over the world, social and creative hubs for people who want to get out of their basements and into a professional workspace but don’t want to take on the costs of rent and equipment on their own. And like 1871 in Chicago, they have also become important creative hubs and business incubators.

Is "carbtastic" a word? Maybe you prefer "carbliscious"? Either way, we're taking a cruise on the good ship pizza, and no, it's not gluten-free.

Pizza is a big thing in New York, but it's arguably a bigger thing in Chicago... well, thicker anyway.

Chicago—Earlier today, John Lutz nearly announced his candidacy to assumed billions of Internet viewers and his purported Facebook friends: “My name is John Lutz and I’m announcing my candidacy because I’m #goingsomewhere”. An elderly relative was reported as saying, “I’m glad he’s going somewhere. I’d like my basement back.”

Dear Boss: Here's Why You Should Send Me to the 2015 SEGD Conference

Does your boss need some persuading to sign off on your trip to Chicago for the 2015 SEGD ConferenceJune 4-6? We can help with that. Here’s a letter that will show her the ROI, not to mention the ROO and the ROA!

Wendy Fok is a globe-hopping architect, design researcher and tech maverick whose work marries spatial design with exploration of emergent technologies. Winner of the ADC Young Guns Award and one of Perspective’s 40 Under 40, Fok says cross-pollination and creative strategy are where it’s at for her generation of designers. She'll be a featured speaker at the 2015 SEGD Conference: Experience ChicagoJune 4-6, and she's created a video inviting you to join her!

School's In for 2015 SEGD Academic Summit

The 2015 SEGD Academic Summit, June 3 in Chicago, will present the latest in peer-reviewed research related to EGD and XGD. Topics include Social Engagement through EGD, Responding to User-Centered Needs through Designed Experiences and User Engagement in Interactive Signage Design, among others.

The Museum of Science and Industry Chicago uses digital technology and nature’s own graphic language to teach visitors about math.

When the Museum of Science and Industry Chicago conceived its latest permanent exhibit, the design brief was concise and non-negotiable: Create an artful and immersive way for visitors to explore the beauty of mathematical patterns found in nature. And make it cool.

Pizza and hotdogs and public art? Chicago’s got ‘em. Da’ Bears and Wrigley Field? Yep. The Magnificent Mile and world-class museums? Check and check. With its rich art, architecture, and design heritage, cultural attractions, and stellar park system, Chicago is the original Experiential City. Here are 15 (of many) reasons to get your experience on in the Windy City!

How Sweet It Is!

I have a confession to make: I'm a closeted dessert eater. When I'm out, I often cave to peer pressure, and say, "Oh, I'm too full for dessert." But when I'm alone or with my trusted inner-circle of dessert-eating friends... it's totally on!

As Hunter Tura travels the world recruiting talent and guiding the strategic direction of Bruce Mau Design, he thinks a lot about the 21st Century Designer. And he says that if you want to be one, you need to act like Beck, think like an editor, and learn something from 1970s pornography. Read our Q&A with Hunter.

Zagat's Sara Freeman just covered the 10 Hottest New Restaurants in Chicago. From old-school Italian to groundbreaking new concept restaurants- these are the trendiest eateries in the windy city. Use this list to plot your culinary courses during your 2015 SEGD Conference ExperienceJune 4-6. Yum!

For each, here's a link to more information, and a ten word super-summary:

It’s not too broad a statement to make that LinkedIn has revolutionized the very nature of connection in our world. The professional networking start-up now counts 300 million registered members worldwide and employs 5,700 in 30 offices around the globe. When it created new offices for its Chicago-based sales team, “Our goal was to create a workspace that employees want to work in,” says Joel Wood, LinkedIn’s Senior Project Manager, Global Workplace.

Celebrating Chicago in a Flexible Workplace

Flexible workspaces are all the rage in the corporate world. For Motorola Mobility's new headquarters in Chicago's repurposed Merchandise Mart, Gensler tweaked the 21st century office genre with a hackable, graphically layered environment that celebrates Motorola's employees and the city they love.

CHICAGO (March 19, 2015) — Chicago has long been considered a hub for architecture, design, and innovation, and the 2015 SEGD Conference: Experience Chicago will gather here June 4-6 to focus on the future of experiential design and its impacts on the city and those who shape it.

Design Thinking for the Underserved

George Ayeand Sara Cantor Ayecreated Greater Good Studiobased on the core beliefs that research changes design, design changes behavior, and behavior changes the world. Both have backgrounds in engineering and design, and both are teachers (George is a tenure-track assistant professor at the School of the Art Institute of Chicago, while Sara lectures regularly on social design at the Kellogg School of Management and the School of the Art Institute). They both left jobs in traditional design firms to co-found their small Chicago-based studio focused entirely on underserved populations.

Let’s face it. From the generic concrete canyon of the parking garage to the endless corridor to your gate, airports tend to all look the same. At Chicago O’Hare’s newly renovated International Terminal 5, Thirst changed all that—creating a super-scaled mural that is uniquely Chicago (with some wayfinding cred to boot).

Second to None: 2015 SEGD Conference in Chicago

Okay, it may be called the Second City... but Chicago takes the back seat to no one. From the Magnificent Mile to the shores of the mighty lake, and from Oak Park to Lincoln Park to Millennium Park, Chicago is chock full of EXPERIENCE. The best shopping in the world? Check. The best pizza? You got it. The best cultural, arts, and design attractions? Think the Art Institute, spectacular museums, amazing music venues (blues anyone??), an unparalleled park system, and attractions like Navy Pier and the Architecture River Cruise.