“I feel that as designer, we are a rather privileged group. The world is our office—literally no confines to what we might do, especially in conjunction with architects, behavioral scientists, urban planners and the government.” —Susan Jackson Keig

Keig, an award-winning, prolific Graphic Designer and Art Director with 73 years of service to the profession and community, died last week just 10 days short of her 100th birthday.

Keig graduated from the University of Kentucky in 1940 with a bachelor's degree in art and design and went on to do post-graduate work at the Corcoran Art Gallery School as well as serve her country as a member of the cryptanalysis division of the Signal Corps, based in Washington during WWII. Her group broke the Japanese code—an important part of the allied victory.

After her Signal Corps service, Keig returned to the University of Kentucky Art Department to take an instructor position, before moving to Evanston, Ill. In Evanston, she was first Art Director for the firm of Science Research and Associates, before studying and teaching at the New Bauhaus at Illinois Institute of Technology under László Moholy-Nagy.

In 1948, she joined firm Dekovic-Smith. From 1955 through 1956 she served as the first female president of the Chicago Society of Typographic Arts. She joined Morton Goldsholl Design and was a colleague of Frank Lloyd Wright during the late 1950s as she completed a lauded home design with architect Crombie Taylor. Keig was appointed a United States Delegate to the World Design Conference in Tokyo in 1960, which led to a longstanding relationship as a contributing editor for Communication Arts Magazine.

Keig was Vice President, Executive Designer of Goldsholl and Associates in the late 1960s, leaving several years later to become Vice President at Lathem Tyler Jensen. She started the private practice she would maintain until her death, Susan Jackson Keig Design, in the mid 1970s.

Keig was the recipient of over 250 awards for her graphic design work including fellow awards from SGA and AIGA. Over the years, she has lectured extensively, authored six books and her works are retained in many cultural institutions including University of Illinois, the V&A Museum of Design and the Smithsonian Institution (Archives of American Art and the Lemelson Center). Most recently, she was included in the Ukrainian Institute of Modern Art Chicago's "Chicago's Bauhaus Legacy" and Graphic Design USA's "100 People to Watch (2018)." Keig hardly slowed at age 99, completing projects for clients like the Chicago Design Museum in 2018.

Susan Jackson Keig once said of designers: “Once they ﬁnd out what you can do, they can’t do without you.”

Read this blog by Sharon Brooks: Rolling Along (with Susan Jackson Keig)

Keig's obituary in the Chicago Tribune

An article about Keig from Dordt College AIGA 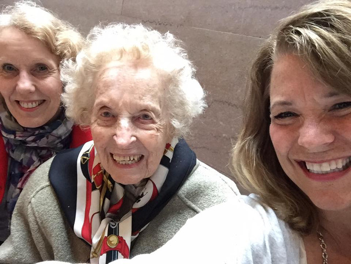 I only met Susan for the first time in 2014. I instantly wanted to learn as much from her as I could, which was why we began writing to one another. I still have a copy of the Shaker calendar that Susan designed and took photographs for, and a couple of hand written letters that she sent to me. Her handwriting was amazing! In one of the letters she wrote, “I enjoy my work so much, especially meeting fellow designers like you so I continue every day.”

At the Art Institute of Chicago, where the photo was taken in 2016 (at another SEGD Chapter Event), Susan was joyful and inspiring—just look at that smile!

Not only did I look forward to seeing Susan at our conference—she came almost every year!—I knew she would bring ideas for chapter events and tours in her hometown of Chicago. I always loved hearing about her work with the Shaker villages. She was one of a kind.

Susan was a pioneer in the design industry and a typography master. A Chicago design legend, she was extremely active in SEGD Chicago chapter events well into her 90s. I had the pleasure of meeting her on several occasions; she was so engaging and willing to share her design and life stories. She was a trailblazer—her legacy will continue through the many young designers she influenced throughout her career.

Susan has been my friend since we met walking the grounds at the SEGD Conference at Cranbrook, Detroit over 30 years ago. In addition to her laudable design talents, she held personal relationships, especially those with colleagues from all walks of design, as her highest priority. She was a true collaborator; she deeply appreciated the work of others, never touting hers and always giving credit where due.

Susan radiated a gentle southern Kentucky charm (always in a dress and pumps, proper handbag on her arm), while inside she was always an incredibly focused, insightful maverick, never wasting time nor words. In fact, she never said "good-bye." As soon as the critical information was exchanged or our visit complete, she was gone. On so many calls, once we arranged details of our next meeting, I would continue a conversation—only to be speaking to a dial tone. She was already off to the next thing!

I miss my design buddy already.