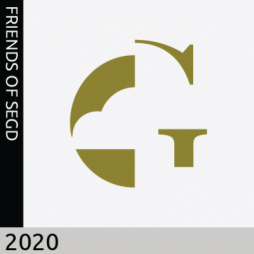 2010 SEGD Fellow, Partner Cloud Gehshan Associates.  Virginia Gehshan and Jerome Cloud were the recipients of the prestigious SEGD Fellow Award in 2010. They have built their practice on intellectual rigor, systemic thinking, and a user-centered approach to information architecture.

When Virginia Gehshan and Jerome Cloud forged their design partnership in 1986, they intended to build an idea firm-one that leaned toward innovation and away from quick turnaround, fast-money projects. Two-and-a-half decades later, clients seek them out for their thorough research and analysis, methodical design process, and perspective that recognizes signs are just one of many physical expressions of a brand or place.

Cloud Gehshan Associates may be best known for its groundbreaking work on large, multi-component projects such as university campuses, medical centers, and park systems. Their work integrates identity, storytelling, signage, and information systems in a process they call placebranding.

They are also innovators. The firm was the first to incorporate sculptural elements into directional signage (University Center, Baltimore), created the first exterior interactive wayfinding kiosks (Johns Hopkins University), and created one of the first prototypes for branding, interpretation, and signage for the U.S. National Heritage Corridor system.

Both are teachers and lecturers on design issues, and Gehshan-a past SEGD board member and president-authored many of SEGD's foundation documents, including its Standard Form of Agreement, Process Guide, Fee Guidelines, and RFP.

Jerome Cloud has been Principal in charge of design at Cloud Gehshan Associates in Philadelphia since its inception in 1986 where he has won numerous awards for his work in identity, placebranding, environmental signage and wayfinding, interpretive systems and print communications.

He is a founding member and former Vice President of AIGA/Philadelphia, the first chapter in America. He earned his BFA from The University of the Arts, where he taught in the graphic design program and currently serves as senior design critic. Mr. Cloud earned his MPS in Design Management from Pratt Institute in New York City. He is a frequent presenter and lecturer, and his work has been recognized in leading design magazines and publications worldwide.

Working with the National Park Service and the Delaware & Lehigh National Heritage Corridor, Mr. Cloud developed one of the first prototypes for identity, signage, and interpretation for this 154-mile heritage corridor in Pennsylvania. He has created comprehensive brand/ identity and signage programs for the City of Richmond, Richmond Riverfront Canal Walk, NewYork-Presbyterian Hospital and Columbia University Medical Center, George Washington University, University of Rochester, George Mason University, and the University of Virginia School of Law.

He developed a signage systems for Philadelphia’s Fairmount Park system that extends throughout the park’s 9,200 acres and  includes many of the city’s most historic areas, including the Benjamin Franklin Parkway and the Delaware Riverfront.