The Cincinnati Chapter's first 2021 event, first in-person gathering since February 2020, and first event for new co-chair Lisa Bambach was a success. Around 20 professionals and students attended the tour of Lick Run Greenway, which was amplified through social media and email, with registration hosted on Eventbrite. 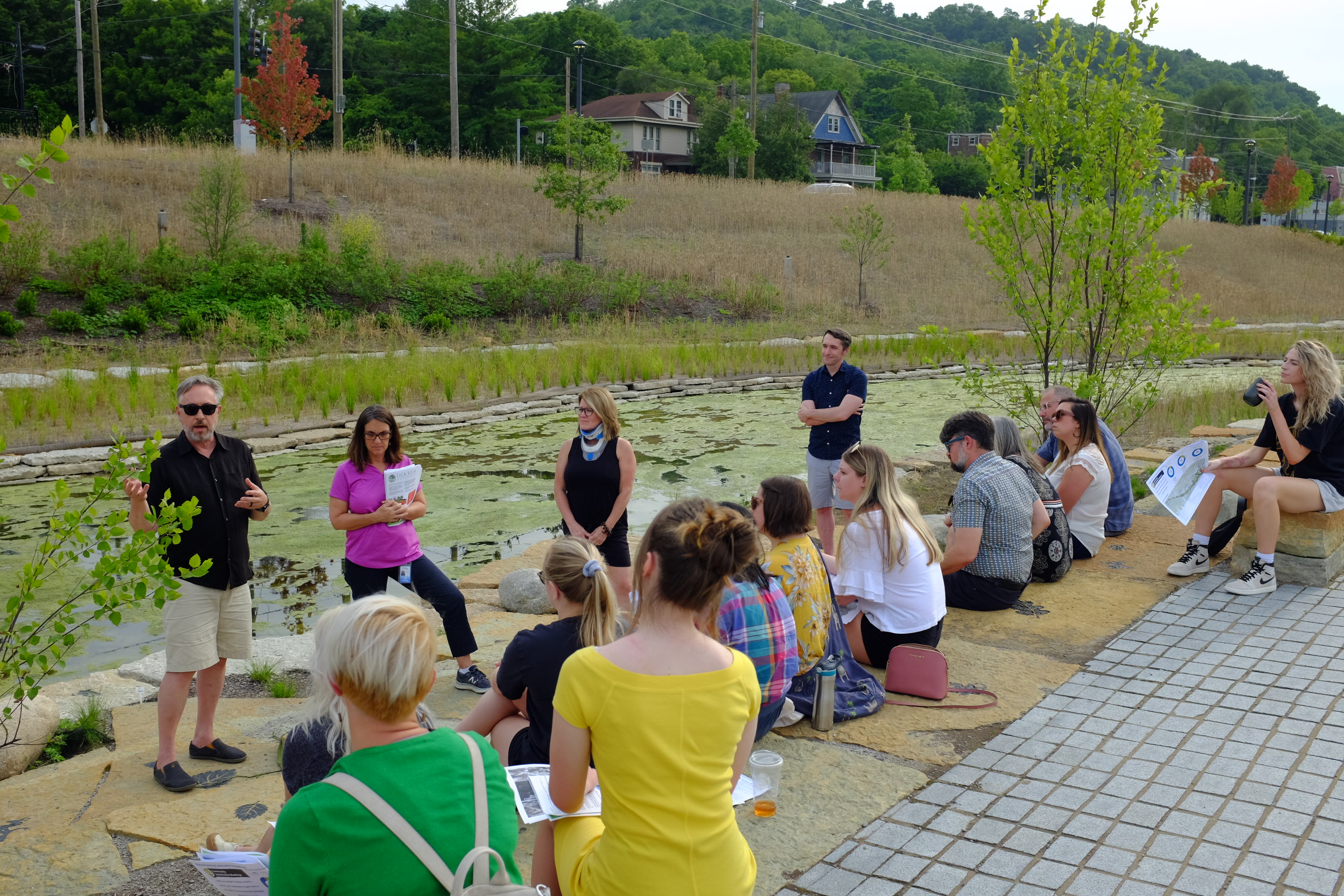 The tour explored how an infrastructure project can be elevated to a community asset. The impetus of the project was a federally mandated sewer project, in which MSD was required to separate the combined sewer overflow (CSO) of sewage and storm water run-off within the neighborhood of South Fairmount. This gave Cincinnati the opportunity to reintroduce the original watershed, which had been located in the valley for centuries prior to modern development. The project itself cost over $2 billion, making it one of the largest public works projects Cincinnati has seen in its history. 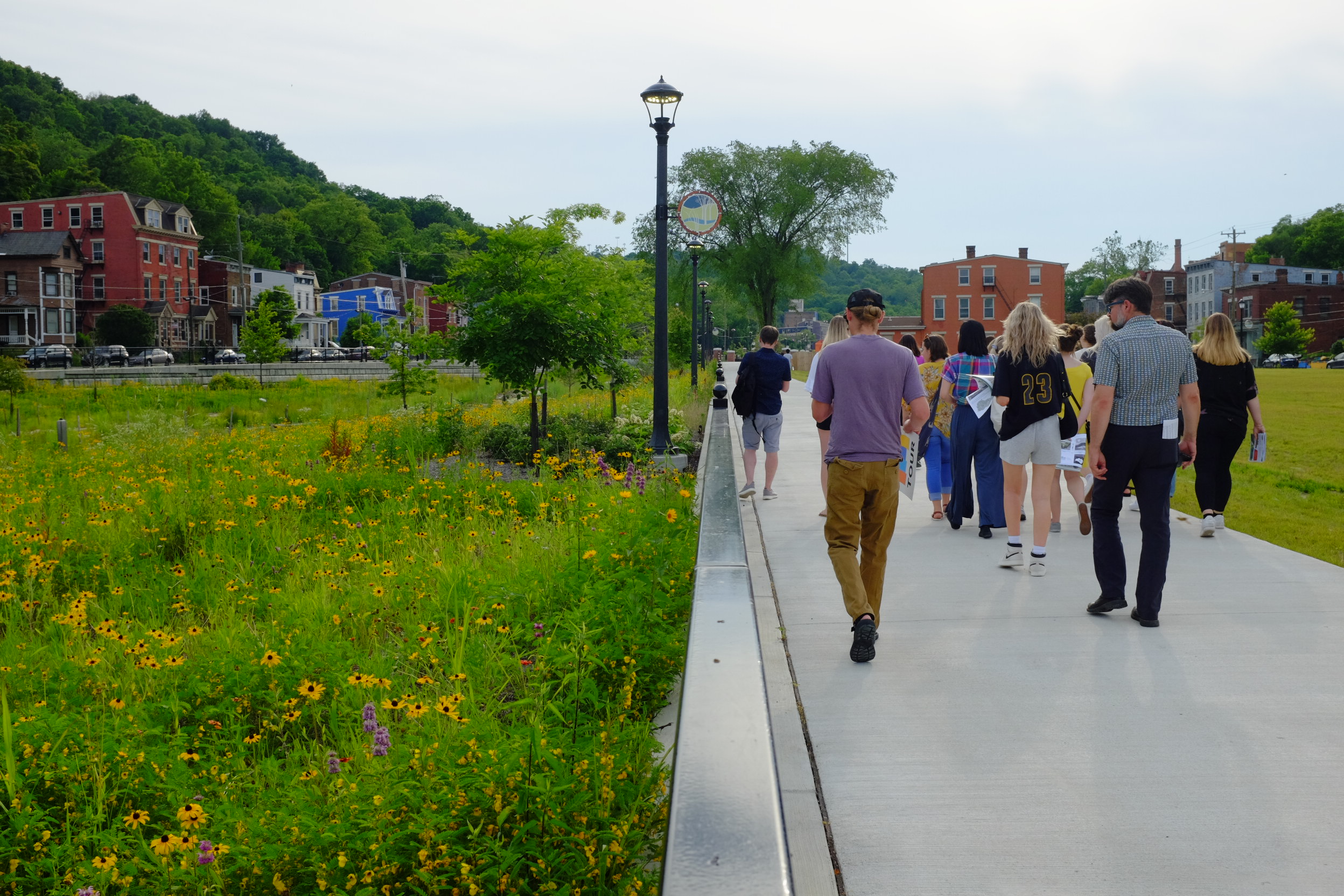 The multidisciplinary team capitalized on the opportunity to not only solve the environmental challenge at hand, but found opportunities to introduce native green infrastructure, highlight the history of the community, and integrate assets to make the space a community destination. A multi-use trail winds along the creek bed and wildflower meadows, welcoming cyclists and pedestrians alike to traverse the milelong greenway from the western headwaters (where the stream emerges from an underground system) to the eastern retention pond. The story of the community, stretching from its time as a Native American trading route to its modern history as an urban residential community, is etched along the pathways, captured in historic markers, and reflected in the design of the greenway's identity. Existing recreation space has been enhanced with new playgrounds and basketball courts, which have also been made more accessible with improved sidewalks, shelters, and new parking lots. 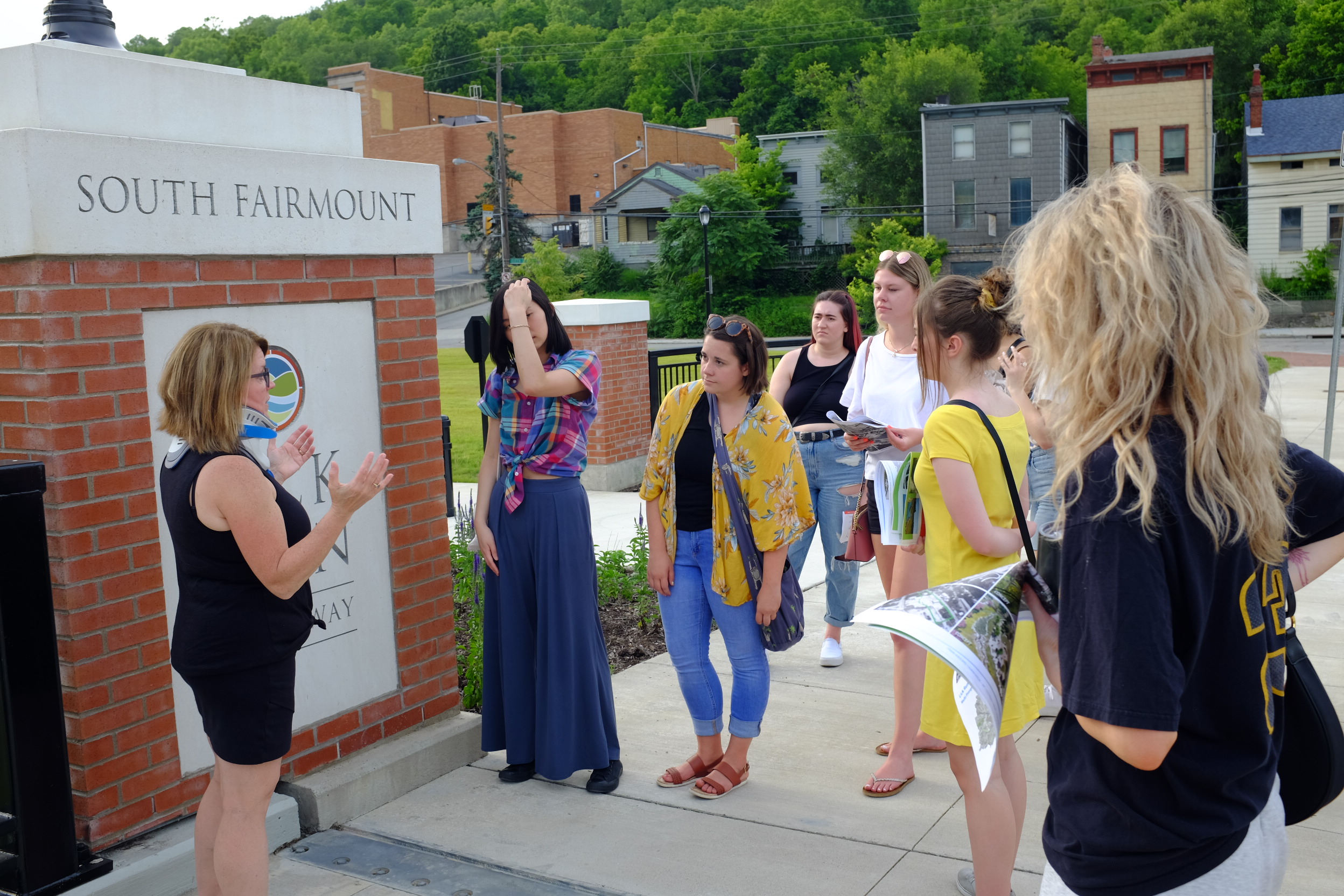 SEGD Member and Creative Director Joell Angel-Chumbley explains how a brand was developed for the greenway to build connection to the South Fairmount community. 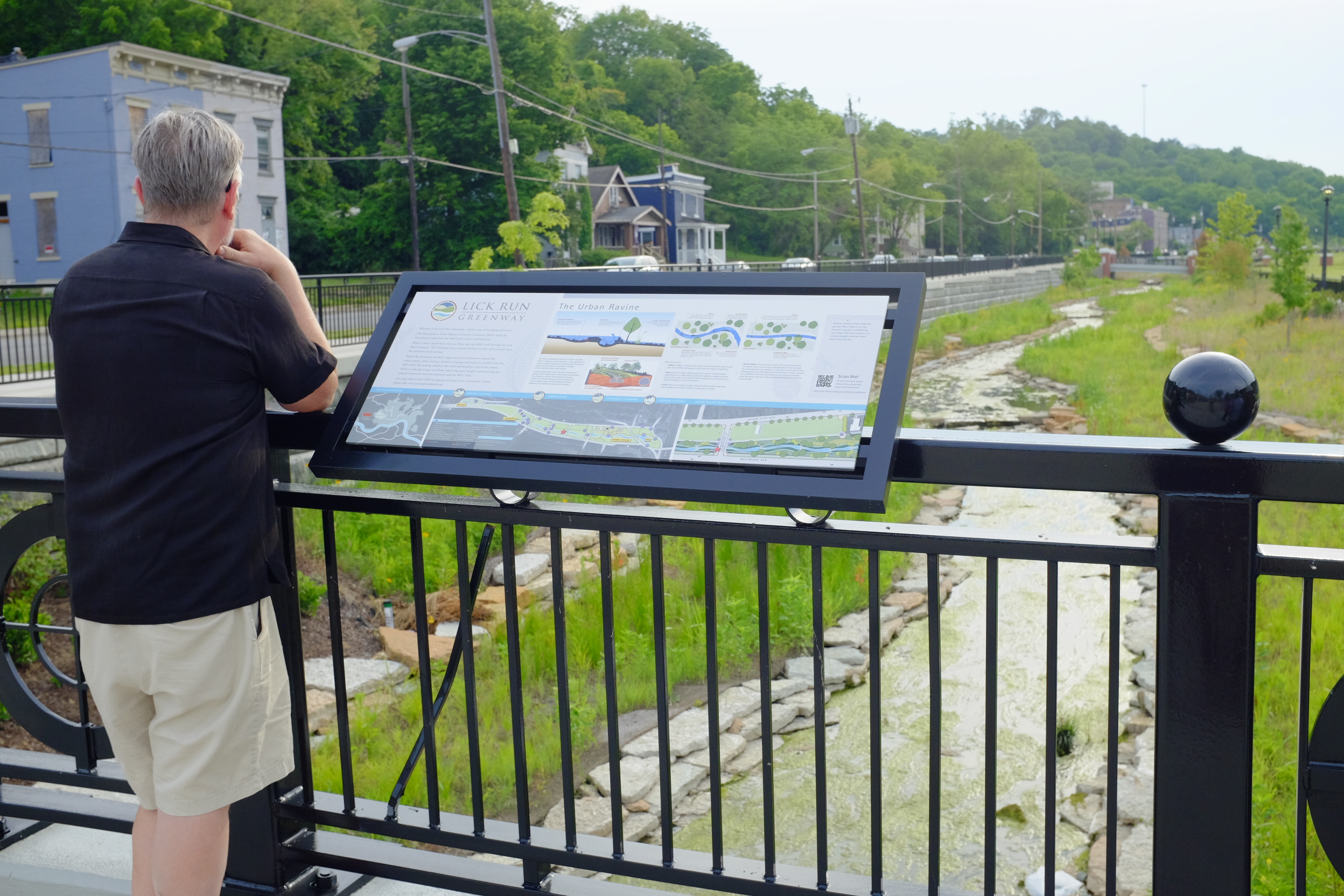 An informational panel integrated into the railing system overlooks Lick Run and explains the technology and green infrastructure behind the design of the greenway. 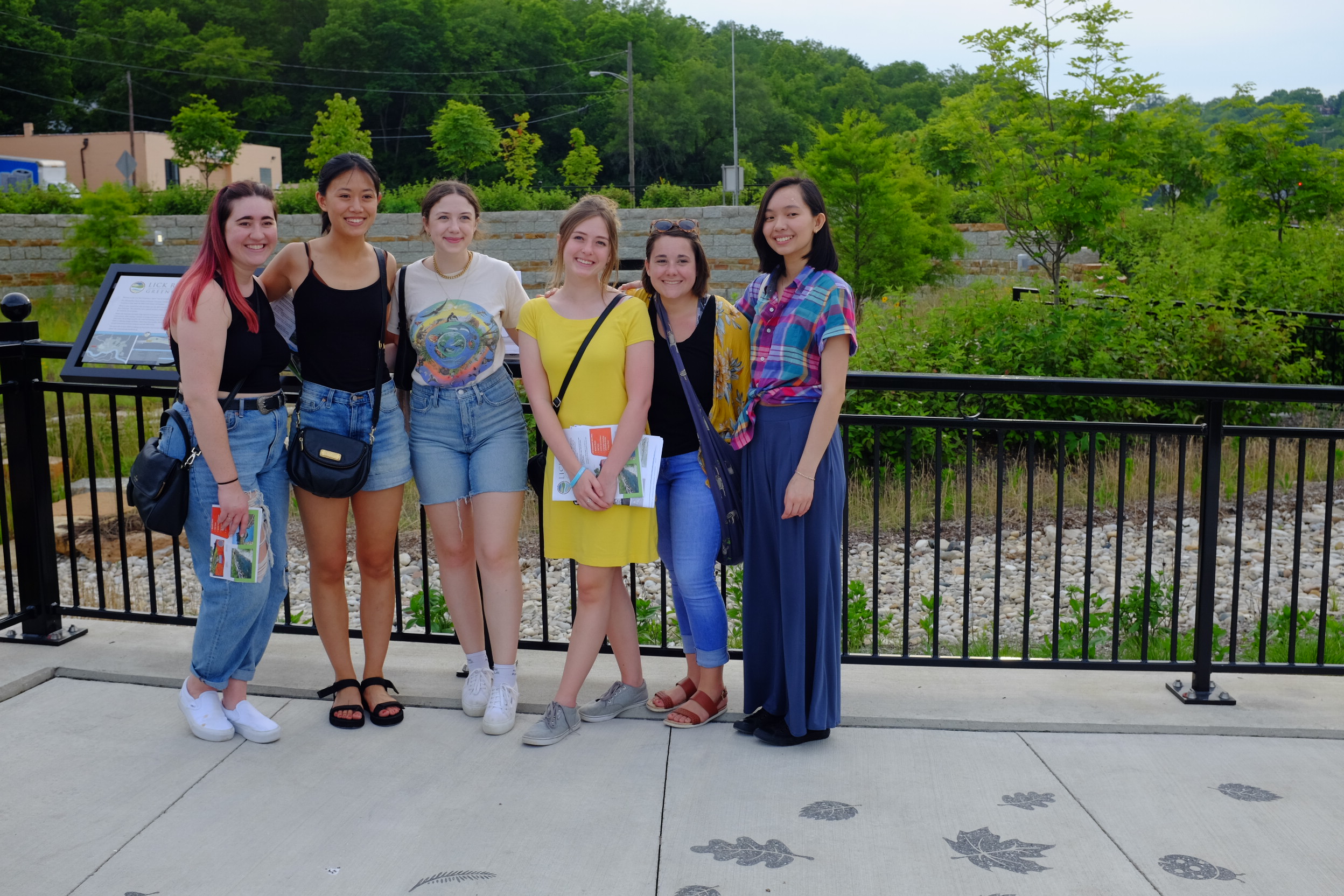 Seniors from the School of Design at UC's DAAP pose for a photo opp at the headwaters.

The Lick Run Greenway is a prime example of how engineering and designing with experience in mind can make a positive, lasting impact on the health and vibrancy of a community. We look forward to visiting Lick Run again in the years to come to learn how the greenway has grown and flourished as part of the South Fairmount and Cincinnati communities.