Bruce Rosenbaum, the Steampunk Guru according to The Wall Street Journal and others, believes the best approach to design thinking and the greatest design innovations are grounded in Steampunk.

It is indisputable that the computer is a world-changing creation. While it was not widely adopted until the later part of the twentieth century, an outside-of-the-box thinker nearly changed the course of humankind with his inventiveness over a century earlier. In the mid-1830s, Renaissance man Charles Babbage developed the Analytical Engine. His design had the capacity to be the world’s first computer, but it never came to fruition because he lacked necessary funding. His originality represents everything Steampunk stands for — the combination of historical resources and advanced technological thinking to create a groundbreaking, retro future.

In the 1980s, Cyberpunk was all the rage, with films and pop culture envisioning how technology might present itself in the future. Movies, such as Terminator, embody this era. Science fiction writer K.W. Jeter sought to turn the prevailing trend on its head. He, and other innovators of the time, imagined the Victorian period or the Industrial age with access to modern technology. These pioneers envisioned the opposite of an extrapolated future and instead established an alternate, reimagined history. It was the beginning of Steampunk as a formal concept.

Steampunk fuses art, technology and history, and necessitates multi-directional thinking. The genre’s complex nature, according to Steampunk advocate Bruce and academics alike, is key to improving one’s approach to design. Albert Rothenberg, a psychiatrist who studied the creative process, called this approach “Janusian Thinking.” The concept is named after the Roman god Janus, who is depicted with two heads facing opposite directions and represents the middle ground between concrete and abstract dualities. Rothenberg discovered that great problem solvers focused on a problem in the present, while also looking to the past and future.

Linear thinkers draw a line between the Problem and the Solution, and methodically work their way towards the Solution. Those who successfully realize Janusian Thinking are not linear thinkers. Instead, they are divergent thinkers who draw inspiration from different spaces simultaneously. In fact, they place the Problem in the center and intentionally develop two opposite Solutions. Magic happens when these innovators creatively synthesize their Solutions to solve the Problem. See a representation of the difference below. 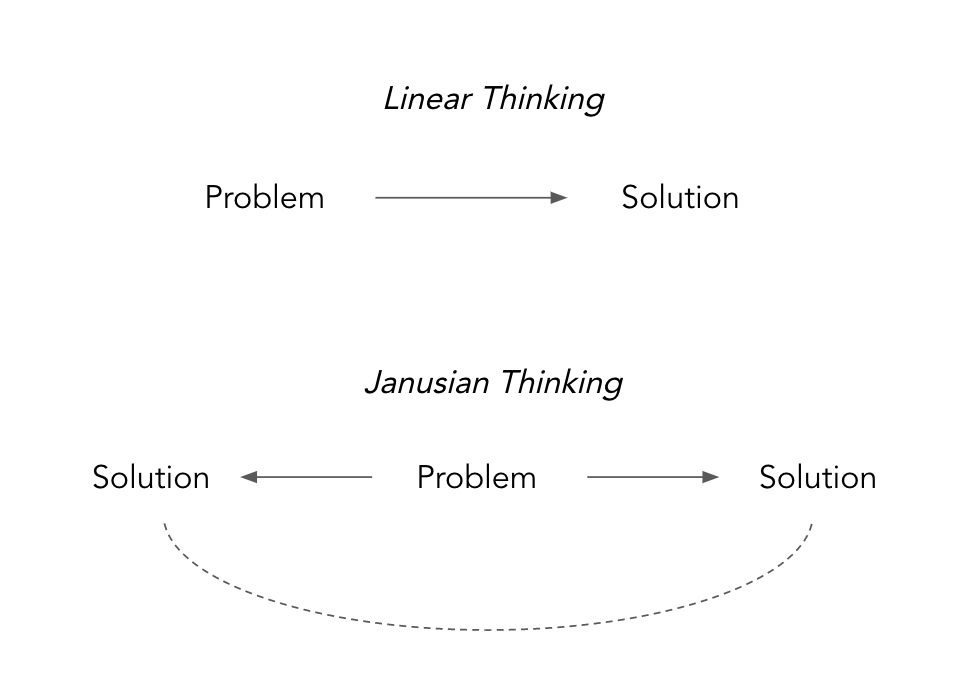 A simple tool is the hammer. When it was first invented, it had one purpose: to manually drive nails and other fasteners into material. Later, the tool was the recipient of Janusian Thinking when its opposite function was added to the mix. The claw, which removes nails and other fasteners from material, is now a standard addition to the hammer. While it seems obvious to us today, the hammer as we know it would not exist without divergent thinking.

Bruce, who advocates for the value of Janusian Thinking in design, is a qualified practitioner of this theory. His company, ModVic, transforms period, repurposed, personal and meaningful objects, and creatively infuses them with modern technology. He builds miniature so-called time machines by using meaningful, beautiful, well-created objects from the past. Oftentimes, these objects have been deemed obsolete, having lost their place in contemporary society. ModVic gives them new life, meaning and purpose by integrating the antiques with contemporary technology. By reassembling them using divergent thinking, ModVic transforms the ordinary into the extraordinary.

Demonstrating Janusian Thinking’s virtue beyond product design, Bruce has channeled the way of thinking to achieve breakthroughs in childhood education. In partnership with UMASS Lowell’s Professor Ashleigh Hillier, ModVic developed a nine-week Steampunk-inspired program named Steampunkinetics. The initiative promotes STEAM (Science, Technology, Engineering, Art and Math) education for atypical and neurotypical children and adults. In one run of the program, fifteen students on the Autism spectrum worked in small groups to design and build their own Steampunk-inspired, Rube Goldberg contraptions in a small crate and then created ‘rooms’ in a house. Then, the separate groups worked with each other to tie all the rooms together so a ball would follow along a track from the attic to the basement.

By practicing creativity and collaboration, and merging different solutions into one solution, the students realized significant breakthroughs. The project fueled participants’ self-esteem, reduced feelings of stress and anxiety, and encouraged healthy collaboration and communication. One student participant’s parent noted that their child was excited to share his new ideas, which was “a huge leap” for him. And the final product was monumental.

An experience designer might be challenged to address a problem. Perhaps a museum client wants to tell a story in a non-compelling way, or a hospital client is advocating for a disjointed wayfinding approach. When faced with a complex challenge, think about Steampunk and consider divergent thinking. Try realizing different solutions, not just one solution. And, as a next step, push to bring the different ideas together. By employing Janusian Thinking to overcome a challenge, the project could very well elevate to the realm of groundbreaking.

EGD Taxonomy for searching the knowledge base of SEGD: