After our last successful speakers series, we are back with more! Join us to hear relevant industry speakers discuss this year's topic: CHANGE, in varying contexts. Followed by social networking, snacks and refreshments. Meet other designers, architects, fabrication experts, and students!

Meet and greet with your Chapter Chairs: Cynthia Damar-Schnobb & Phillip Novak. Feb 28, 2017 at 6PM. Downtown bar (TBD). Non-members welcome! Email us to confirm if you are coming by Feb 24: [email protected] We'd like to meet you!

You are invited to the Toronto premier of Wall Writers!

Following graffiti's early days on the streets of NYC and Philadelphia in the 60's and the commercial crossover of street art in the 70's, the art form has since exploded into a global revolution of creative expression. Roger Gastman's documentary reveals the growth of the wall-writing movement that would eventually transform the way we view our cities and redefine the notion of public art around the world. Narrated by legendary filmmaker John Waters, Wall Writers features unprecedented access to the forefathers of graffiti with CORNBREAD, TAKI 183, SNAKE1, and more than two-dozen others, along with testimonies from the journalists, historians and politicians who bore witness to the largest art awakening of the 20th Century.  WALL WRITERS (2016): GRAFFITI IN ITS INNOCENCE
Director: Roger Gastman
Runtime: 78minTrailer: https://vimeo.com/39232569Synopsis: From director Roger Gastman—a producer of the Academy Award-nominated documentary Exit Through the Gift Shop—comes Wall Writers, a documentary on graffiti in its innocence.Through unprecedented access to TAKI 183, CORNBREAD, and a host of other legendary writers, Wall Writers tells the story of a time when underprivileged city kids refused to keep lurking in the shadows, when the streets were so wild that fame and infamy became indistinct, when art became a democracy and self-promotion became an art. And the narration is done by John Waters!  DIRECTOR’S STATEMENTGraffiti has been a part of my life since 1991. When I was just getting into this world as a teenager, I always wondered where it came from and who started it. First, I should define what graffiti is to me: someone writing his or her name over and over in illegal places for the sake of fame. It’s worth mentioning that the media termed this ‘graffiti’ while the people doing it just called themselves writers. I mean American graffiti, not Egyptian hieroglyphics or political murals. So many people have claimed to be “the first” in the US over the years but when you do the math, it turns out they would have been four years old or something. Wall Writers: Graffiti In Its Innocence is my answer to that curiosity. It is an exploration and excavation of the people who started it all, unknowingly launching the biggest art movement of the 20th century, one stroke at a time. Unearthing thesewriters and telling their stories was a challenge — an obsession, even. The film took seven years of hardcore research and I kept the focus on Philadelphia and New York of the 1960s and 70s. This project and the accompanying book involved tracking down people known only by pen names, piecing together shreds of information like a puzzle and trying to document things that have long been erased -- literally. This film is my curation of a form that was widely reviled and largely undocumented. My goal really was to tell the story of the kids who started this movement — many who had been forgotten or are unknowns to the culture of today. I wanted to give them a voice and their rightful place on the historical timeline.-Roger Gastman 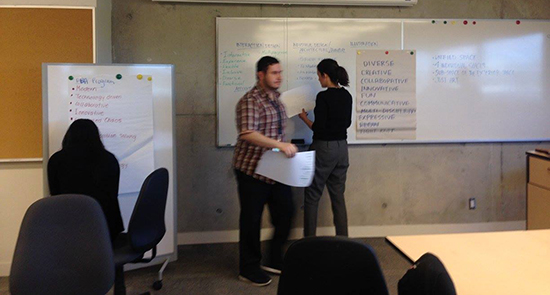 A Creative Morning on Campus

We had a great charette session this morning at Sheridan College with such creative group of students from various disciplines, incl.: Illustration, Industrial Design, Interaction Design, Business & Accounting, Architecture, Furniture - to develop the content/design of the walls at the Creativity Commons area of the new Hazel McCallion Campus 2 building. Thanks to all of the students who participated!

With a record breaking 70+ attendance, the SEGD Toronto’s Speakers Series on Placemaking was a great success last night at Artscape Youngplace. A panel of four speakers explored the topic from their varying perspectives and industry experience. Speakers included Tom Keogh, Bruce Mau Design; Barb Spanton, Macadamian Technologies; Christopher Arnold, FORREC Ltd.; and Paul Kulig, Perkins+Will. Thanks to everyone who came out!