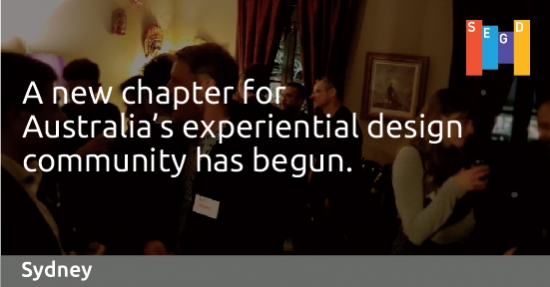 SEGD is now in Sydney

Nick Bannikoff, Design Manager at BrandCulture and Carlo Giannasca, Head of Environments at Urbanite (Frost*Collective) – Co-Chairs of the SEGD Sydney Chapter – invited designers, architects and suppliers to share their ideas for building a stronger experiential design community here in Sydney.

Carlo kicked things off by saying the new Sydney Chapter is one of 30 SEGD (Society for Experiential Graphic Design) Chapters globally.

“We’re proud to be starting a local chapter in Sydney – it’s a small profession here but I think we’re very passionate and we want to foster that ability to build connections that help us all,” he said.

“The purpose tonight is to talk about how we can grow the community together and talk about some of the events we have planned.”

Nick Bannikoff, BrandCulture’s Design Manager, thanked everyone for braving the cold to talk about experiential and wayfinding design.

“SEGD was founded to help people collaborate and build partnerships within industry,” he said.

Of course here in the Antipodes, it can be hard to get time off to attend events in the United States, which inspired the launch of SEGD’s Sydney chapter.

“We wanted to get together tonight to find out what you want: what events would you like to attend? How should we be going about it as an organisation?”

He and Carlo are planning to host three kinds of events for Sydney’s experiential design community: events that educate; events that celebrate our industry’s achievements; and social events.

“Obviously we’re an industry which is undergoing radical change, so who should we talk to? Who’s doing something exciting and new? What can we learn from the people that manufacturers are collaborating with? We’d love to hear your recommendations,” said Nick.

At the annual SEGD Awards in the US, Australia wins more awards per capita than any other country. “We do amazing work here. So in February next year, we’d love to give SEGD winners in Australia and New Zealand the chance talk about those projects and celebrate what we achieve. What were the trials and tribulations? What didn’t go through? How can we learn from each other as an industry?”

Of course, the success of the SEGD Sydney Chapter ultimately depends on what the local Sydney design community makes of it! So, Nick and Carlo would love your ideas and suggestions so that together, we can make our industry stronger.

Get in touch by emailing [email protected] or via SEGD’s Sydney chapter page. 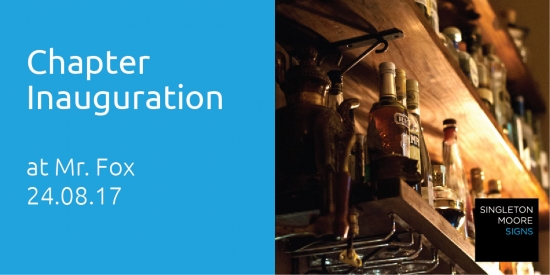 This is the event you can attend without dreading the question ‘What do you do?’ Catch up with old friends, meet new ones, and shamelessly discuss wayfinding and experiential graphic design.

Co-Chairs Carlo and Nick will be outlining the events that the SEGD Sydney Chapter has planned for the year ahead, and will canvass the crowd for your opinions, suggestions, thought-bubbles and involvement.

We’re a small profession in Sydney, but are passionate and achieve great things. We want to foster that ability, and build connections that benefit us all, this is your chance to help us achieve it.

We’re keen to have as many people included as possible, so invite your studio members, clients, in fact anyone you know who may have an interest in SEGD.

We’re thrilled to announce this event is sponsored by Singleton Moore Signs who will generously be providing light refreshments.

Where: Mr. Fox, 557 Crown St, Surry Hills
When:  Thursday, 24th August at 6.30pm.
Ticketing: This is a free event. SEGD members are guaranteed access, but it’s a small venue so visitors are on a first-booked-first-served basis.

RSVP to secure your spot

On the 16th of February 2017 the new SEGD Sydney Chapter was announced at one of the starting events for the SEGD OFF GRID 17 Conference in New Zealand held at the Frost*collective.

"We are very excited to announce the start of a new Australian chapter" said John Lutz SEGD's president, who attended and made the announcement "Australia has the largest SEGD membership of our 35 international countries"

The new chapter will work together with the Brisbane Chapter to develop SEGD Australia's community. It will be lead by Carlo Giannasca of Urbanite, a part of the Frost*Collective and Nick Bannikoff of BrandCulture. A first event is already being planned. Details to follow shortly.

Clive Roux, CEO of SEGD said "the quality of work that comes out of Australia is outstanding and the country has won the most international SEGD Global Design Awards so it stands to reason that we should be creating a community in Sydney."

SEGD's presence in the region is growing as are the activities. If you just missed the OFF GRID 17 event hosted and produced by the SEGD Wellington, New Zealand chapter.

Stephen Minning, an SEGD international Board member was instrumental in getting the chapter off the ground and said "this is really exciting! Sydney has a large design community already that would greatly benefit from a stronger connection to SEGD internationally to experience the warmth and openness of the community as I have been able to."

If you are not an SEGD member already, sign up today to receive all the digital benefits of SEGD membership, which includes access to over 200 videos from SEGD's events over the past 3 years. "It is like being there in person hearing all the talks about the new practice methods and how the various EGD Designers work" said Clive Roux "You can't find content like this anywhere else and it delivers you $3250 worth of member benefits every year - for free."