Each culture has its own unique design aesthetics embedded into their culture and history.

Korea is a land of narrow valleys and winding rivers set within seemingly never-ending layers of mountains. The imagery is so prominently recognized as uniquely Korean, that it is often the focal point of drawings, fabric patterns and murals. The beauty of the land was so stunning, in fact, it inspired traditional Korean architecture and landscaping in profound ways.

The concept of Cha-Gyeong (차경) is a complex, but meaningful word. It expresses the desire of the built environment to exist as part of the entire scenery, where no individual part takes any more importance from one or the other, existing in perfect harmony as if it always was and will be. In this design philosophy, the structure is meant to add beauty to the grand picture, where the subject itself becomes a part of the view rather than the object of attention. The background is just as important as the foreground and both are even more important than the actual subject. This design philosophy even influenced traditional architecture in Korea originally intended for structures to be built from the available natural materials in the surroundings so that if it were to be abandoned or lay to ruins, it would return to the earth what it took from it. Simply put, it’s the kind of design that makes you appreciate the beauty that exists all around the built environment because the built environment was itself designed to frame it beautifully.

Modern day Korean architecture may have veered completely off course from these concepts, but there are a handful of optimists that are trying to preserve and even build modern facilities while applying the principles of Cha-Gyeong. The Ho-Am Art Museum, located in the mountains approximately 40km south of Seoul, is one of the more prominent examples. Founded in 1982, the museum is home to a substantial collection of Korean traditional works of art. In 1997, a large garden (Hee-won) was added to the facility to create a more authentic and suitable home for the historically significant national treasures housed on the premises. Ho-Am Art Museum is quietly nestled in a mostly undisturbed landscape where you can experience the qualities of Cha-Gyeong firsthand as you stroll through the gardens on your way up to the museum. The tranquility achieved is co-dependent on the harmonious blending of that which is behind and before; each stone arranged, each flower blossomed, and every tree branch which frames the sky. Even the signage installed on the premises were designed specifically to preserve and enhance Cha-Gyeong as they exist at ground-level in a dark earth toned finish to blend into the most prevalent colors of the area throughout the drastically changing seasons of the year.

The design qualities of Cha-Gyeong have been an essential part of Korean history, culture and education. Although modern day Korean cities have seen tremendous development and transformation in the past 70 years, there is a growing movement and desire among both young and old to reflect on the beauty of Cha-Gyeong and discover the ways in which we can reinvent and reincorporate these principles into the modern context.

Are there similar design principles in your country? SEGD is a global community of people who love culture, diversity, art, design and each other! I’d love to hear about how your country does ‘Cha-Gyeong’.  Please DO take my invitation to share your knowledge of local design principles that shape and shift your culture wherever you are. You can find a local SEGD chapter and ask them to publish a blog entry on the topic, or you can use the link under the article introduction on our chapter page www.segd.org/tags/icn to ‘Email this page’

Wayfinding is a term that is said to have origins in the days when stars were used to navigate seemingly endless waters and vast empty plains from one cluster of civilization to another. These days, we use the word Wayfinding to describe a discipline of work in which strategies, signage and graphics are designed to guide users as they interact within an environment. We interact with wayfinding every-day and are, in fact, so accustomed to this type of interaction that it’s easy to overlook the importance of properly designed and implemented signage. It’s one of those things that you only notice when the discomfort of feeling lost or inability to locate your destination sets in.

The ongoing trend of housing in Korea seems to favor high-rise apartments over smaller multi-unit residential buildings (2-5 stories).  Post-war Korea saw a sudden surge of Koreans flooding into Seoul in search of work. Strained for housing, many land-owners and investors either renovated their homes to create rentable units, or completely rebuilt structures to create as many units as possible on their plot of land. This created a situation in which many buildings exist almost shoulder-to-shoulder, with narrow passages and crooked streets quickly became a normal part of life in Seoul. Although the skyline of Seoul is a seemingly endless sea of high-rises and modern buildings, much of the city’s residents still reside in neighborhoods like these. Some places, more than others, suffer from overcrowding due to their proximity to urban centers of work. Geumho-dong is one of those areas.

Located just a few kilometers South-East of downtown Seoul, and just North of the Han River from Gangnam (Yes…that Gangnam), Geumho-dong was an ideal place for many different types of families to live in a time when private modes of transportation was an unimaginable luxury for most of the population. That being said, some neighborhoods were built for pedestrian traffic only. As the wealth of the general population increased, people began moving away from neighborhoods like these, favoring high-rise apartments. The direct effect of this transition in housing has affected the way people do wayfinding in Korea. Large apartment complexes have been used as landmarks, even going as far as to officially label nearby intersections as ‘such-such Apt. Junction’ in many areas. The older residential areas, built in the early years of post-war Korea however, have been somewhat left behind in the race to develop, leaving the seemingly haphazardly built environment to organically develop their own systems and ways of adjusting to the ever changing society.

It is in places like these, such as in Geumho-dong, that wayfinding becomes a huge challenge. Not so much for its residents, but for those that interact with the residents through service calls, deliveries, first responders, utilities and infrastructure improvements, and even just visiting friends and relatives. Not being able to drive a vehicle into many parts of this neighborhood only exacerbates the problems with wayfinding because that means people will have to navigate unfamiliar winding streets on a hillside on foot without streets for referencing where they are and where they need to go.

During the investigation phase and ideation phase of this project, our designers noticed that within these abyss-like environments, crowded between red brick buildings in narrow passages, people had a tendency to look up in search of anything they could use to identity their location in relation to a nearby building or to triangulate their general position looking even far beyond at nearby skyscrapers. The simple solution was to place building identification signage where people were naturally looking. It was at this point that ‘Skyline Wayfinding’ was born as a design solution for this residential area.

With the huge success of this project, Skyline Wayfinding is a project that continues to serve as an example for other such areas in Seoul and throughout similar places around the world that analogue Wayfinding solutions can be extremely impactful and are absolutely necessary, but can be done through creative problem solving and strategic design processes.

You can learn more about the project at https://segd.org/skyline-wayfinding and http://www.yieum.com/v2/ourworkDetail.html?seq=129 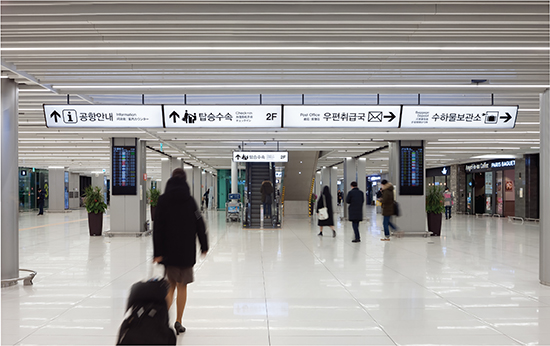 At the 2020 SEGD Global Design Awards, Gimpo International Airport was recognized with an Honor Award for Wayfinding. If you read the description for the project, you’ll find the project title includes the sub-heading “Info Inclusive” In this article, allow me to introduce to you the background and the intent for coining this new phrase and why I believe it should become a part of the greater discipline of designing information for a global audience.

As you’ve probably guessed, ‘Info Inclusive’ is a term that refers to information that is designed to be as inclusive as possible. It’s easy to overlook how much of an impact information presented in one’s native language has on the overall travel experience if you’re from a English speaking country because most major countries and international airports include English on public wayfinding signage. Korea is no exception. If you wonder what the sign says in Korean, you can just read the English translation below. As persons familiar and comfortable with the English language, we are definitely info privileged.

When we were awarded the contract to work alongside the KAC (Korea Airports Corporation) to develop new signage for the Gimpo International Airport, we began by gathering data and conducting field research to see how the existing signage system worked and didn’t work to guide users throughout the space. Due to the close proximity and heavy traffic of travelers from neighboring China and Japan, nearly all public signs had; Korean, English, Chinese and Japanese presented. As you might imagine, that is A LOT of information to present! Further, we found clusters of computer paper printed signage taped to pillars and walls in other languages with airline staff standing in the hallways providing additional guidance to their passengers who couldn’t read or speak any of the languages provided. We also discovered that there was a small percentage of users who were illiterate due to a lack of formal education (fairly commonplace for older generations coming up from the early years post-WWII throughout Asia). We were determined to create an information system that would be inclusive of all these different groups of travelers while improving the effectiveness of the information and wayfinding system.

The obvious winner of information designed for the masses is pictograms. We developed the pictograms to reflect the user’s experience as they moved throughout the airport. For example, the check in counter shows a passenger passing documents to the clerk sitting behind the counter, and departure gates are indicated with a plane nose up from a horizontal ground reference. Furthermore, we strived to make the pictogram the main reference of information by presenting it at a large scale.

We were still required to present information in Korean, English, Chinese and Japanese, however, we were able to reduce the amount of information provided by applying a breadcrumbs strategy. Previously, each sign had presented too much information on a single surface, giving signage the appearance of a page of text. We carefully plotted the various courses of traverse through the airport from various nodes of travel to and from the airport to strategically provide key information necessary to the user along the user’s journey according to the user’s timeline. A simplified example of the timeline is: arrival – check-in – security – customs – departure gate.

During this process of refinement of information, we came upon an unexpected solution that had a profound impact in the overall user experience. For signage directing users to check in counters, we decided to present each airline with their logo in their colors. In this way, travelers can identify their airline provider through familiarity.

Upon implementation, we’ve seen a dramatic improvement to user experience in the airport. Information requests related to wayfinding and clusters of people gathered around signage at pinch points has also been nearly eliminated.

To find out more about the project, please visit the 2020 SEGD awards page and be sure to check out all of the other fantastic projects that were recognized for excellence.