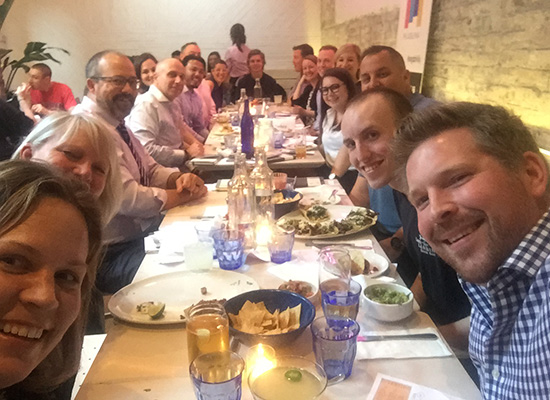 This past Thursday, we met up at Mission Taqueria in Philadelphia to taco 'bout it.

We invited local 16 members representing designers, project managers, educators, fabricators and students all participated to join us for an intimate dinner and conversation about what's next in our industry and the challenges we see ahead.

Dinner attendees were invited to contribute questions for the evenings discussion. As the courses flowed we dove into topics which included: How to work better across industries? What do you look for in the talent you hire? How do we each fit into the design world?

The conversation was honest and open and relevant to all that attended. Thank you to our members who made this event such a success — your thoughtful insight and participation was key. We are looking forward to hosting again and hearing from our other members who couldn’t attend this month. We would like to again thank L&H Companies, our 2018 annual sponsor, for helping us to kick-off this series. 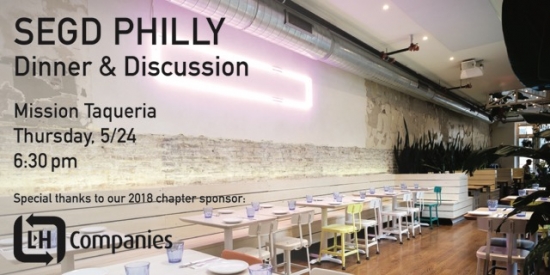 Join us for an intimate dinner and conversation about what's next in our industry and the challenges we see ahead. We look forward to lively discussion and good cross-disciplinary perspectives, over delicious food and drink.

Space is limited. RSVP as soon as possible to reserve your seat at the table. We aim to get even representation from designers, projects managers, fabricators, educators, students etc. Click Here for tickets.

Thank you to L&H Companies, our 2018 annual sponsor for allowing us to kick-off this series.

Hope to see you there!

by Ellie Byrom-Haley, CCO, and President of Gecko Group

Keeping the next generation engaged, informed and excited about experiential design in 2018 and beyond.

The data tells us most kids, teenagers and young adults are more interested in staring at a smartphone over engaging with the experiences we all work so hard to develop.  According to a study conducted by Microsoft, the average human's attention span is now 8 seconds- making it shorter than a goldfish.

While observing visitors engaging in The Terracotta Warriors Exhibit (at The Franklin Institute and Pacific Science Center)  I saw a teenager out of the corner of my eye looking at his smartphone rather than engaging with the exhibit. The 10,000 sq ft exhibit was an international endeavor which took years to develop and an incomprehensible effort on behalf of many collaborators.  This was disappointing at first. However when he entered the pit section featuring a Terracotta Warrior with a projection mapping video that visualized the coloring and decay his eyes lit up! A much better outcome. He seemed captivated as he looked on to the full-size figure which was sequencing through motion graphics displaying the making of the warrior in ancient China.  The integration of this modern technique has the power to influence a newer generation by using visually engaging technology without hindering the conceptual integrity of the message.

Projection Mapping which uses high-intensity projectors to overlay motion graphics on a static object to enhance or change color / depth and create motion within the experience.

Augmented Reality which The Franklin Institute integrated with the user's smart phone/tablet to view the 3D surroundings with digital graphics to enhance an otherwise invariable environment.  Franklin Institute has referred to this as “The real world, but better”. Visitors were able to see the weapons that the Terracotta Warriors were originally buried with. https://www.fi.edu/augmented-reality

Touch Screen Interactives offer a natural way to let your audience directly engage with with more detailed content and the exhibit itself. Although touch screens have been around for decades, the programming framework and hardware technology used to display them is ever evolving and improving making this tried and true approach more valuable than ever.

To learn more about Gecko Group or the Terracotta Warriors of the First Emperor exhibit, visit the website at www.geckogroup.com 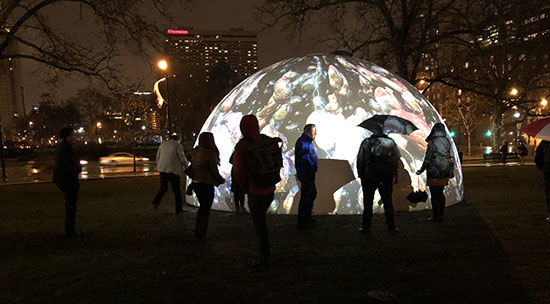 This past Thursday, we met up at the Free Library of Philadelphia to hear from the Association of Public Art and Greenhouse Media about the Winter Fountains Installation that we have all been seeing along the parkway for the last 4 months.

Of course the evening wouldn’t be complete without a few drinks, so to dry off we all headed over to the City Tap House to grab a few drinks.

We would like to thank all who contributed to this event. Thank you to the association for Public Art and Greenhouse Media for a wonderful and interesting presentation --we’re so glad we got to see and learn about these before the installation is gone. Thank you to Walton Signs for being our sponsor for this event. We are grateful for your support and generous contributions.

Stay tuned for our next event! 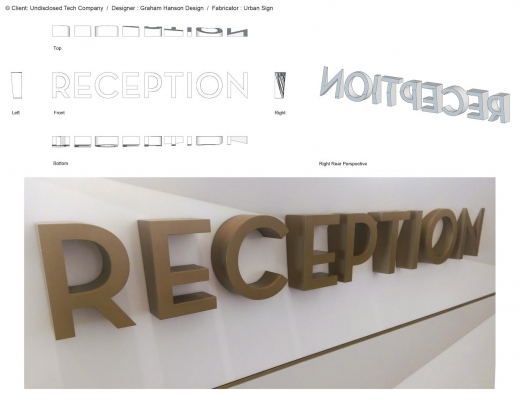 The impression I get from most people on the subject of 3D Printing is they all think it's cool, it's probably the future, but honestly most people can’t put their finger on how it actually applies to them.

Early adopters of 3D Printing and Additive Manufacturing (AM) processes are discovering a competitive edge in the changing manufacturing industry and I believe that there is a pending shift much closer to home in the sign industry leveraging these same technologies.

This is the foundation of a deep and targeted industry research initiative with designers and manufacturers to understand and explain the various types of additive manufacturing processes and how they will ultimately change the way we design, how we work and what we produce. A presentation on the initiative will take place at the ISA International Sign Expo next month in Orlando; it was recently highlighted as one of 6 must-see sessionsby Massivit3D.

The goals in presenting this research are to not only address a strong industry interest into what "Additive Manufacturing" is, but also increase the understanding of where it may go by providing the necessary context, information and dialogue surrounding the topic.

Fundamentals are timeless and transcend technology in every era. Take it all away and artists will still be artists. If anything is inevitable, it is change. I am excited to put this information out to not only advance the subject, but the industry as a whole and welcome any contributors to the initiative so feel free to reach out if you want to participate.