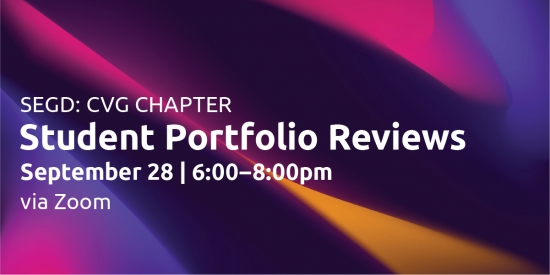 Design students! Want some low pressure, constructive dialogue with practicing designers and design educators? The SEGD Cincinnati Chapter is hosting virtual Zoom chats on Tuesday, February 15th. Students across disciplines with an interest in graphic design, EGD, exhibit design, wayfinding, and other related fields are encouraged to attend – bring a link or share-screen of your portfolio (in-progress or project excerpts are fine!), and any questions you may have about working in a design career. Reserve your free ticket today by signing up for a session time below. You will receive an email with a private link to log in. 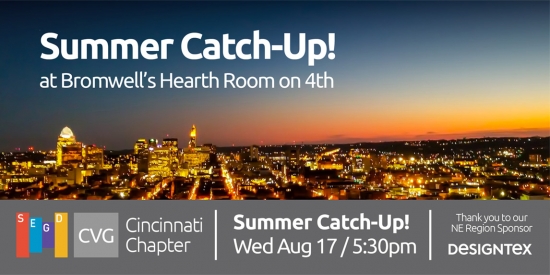 It's been too long – come see us for a much needed chapter get-together! Meet newest co-chair Jessie Kaising, hear highlights from the SEGD Conference Experience in Portland, enjoy some snacks and beverages, and chat with us about what events and topics you'd like to see this fall/winter and into 2023.

Parking: The Fourth & Race Parking Garage is located directly across the street, with entrances on Race or Elm. Street parking is also available. 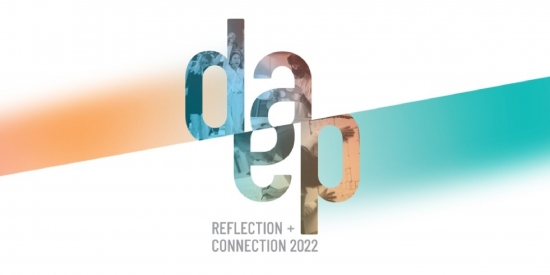 Join SEGD at DAAPworks on opening night to celebrate the new SEGD DAAP student organization and the first recipients of the new SEGD Excellence Award! 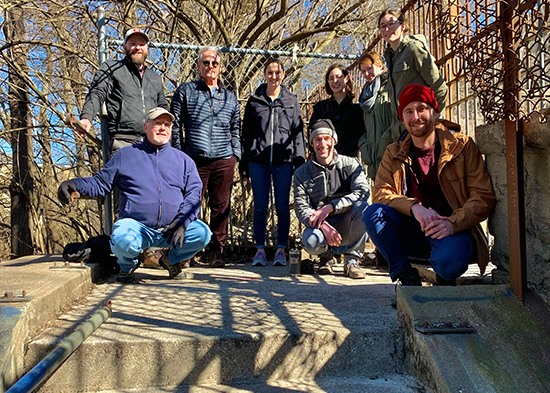 Cities grow through the physical and social connections between people. In Cincinnati, no one recognizes this more than SEGD member and University of Cincinnati Masters of Community Planning student Christian Huelsman, who founded Spring in Our Steps a decade ago to reclaim and enhance the city’s pedestrian pathways. For the past 10 years, Christian has been working with communities and government officials to reclaim public staircases and alleyways by securing funding for repairs and lighting, organizing clean-ups, and creating improved identification signage to draw attention to these spaces that  we so often take for granted.

To mark the anniversary of Spring in Our Steps, SEGD’s CVG Chapter invited Christian to lead a chapter tour of the Over-the-Rhine and Mt. Auburn neighborhood connections in partnership with SEGD Co-Chair and experiential designer Lisa Bambach and Keep Cincinnati Beautiful’s Director of Greenspace and Environmental Services Alistair Probst. The tour focused on a route that showcased the neighborhoods’ historical development and how public action has the power to influence the current development and the experience of communities.

The tour began at Goetz Alley, which runs parallel to the Main Street business district in Over-the-Rhine. Christian explained that this alley had once connected across Liberty Street, a now busy, vehicular thoroughfare that cuts through the neighborhood. When Liberty Street was widened in the mid-20th century to increase vehicular traffic access, a small staircase was introduced at the alley to preserve the pedestrian connection to Liberty Street’s relocated sidewalk. The increased traffic, however, made traversing the roadway by foot hazardous, so in 2020, at the behest of the community, the City of Cincinnati narrowed the street to slow the speed of traffic, introduced bump outs, and built islands to improve safety.

The group took advantage of this project to cross Liberty Street (safely) and made their way to the base of the Main Street Steps. This staircase is the longest in the city and traces the location of the former Main Street Incline that connected the communities from 1872-1898. At the base, Christian and Lisa Bambach discussed a signage identification project which they had completed in 2017 to mark these critical connections. Because no standard regulatory signage exists in Cincinnati for stairways and alleyways per DOTE policy, Spring in Our Steps worked with the City of Cincinnati to design non-regulatory signage that would highlight the connections. The resulting pilot project consisted of 12 concrete signs to denote the hillside connections, highlighting them as critical transportation corridors. Christian is continuing to work with the City of Cincinnati to expand the signage system throughout the city.

At this juncture, Alistair Probst also shared the actions community members can take to maintain their public spaces. Gesturing to a green Adopt-A-Spot sign, he explained that the recently reintroduced Adopt-A-Spot program offers community members the supplies they need to maintain their neighborhoods. Keep Cincinnati Beautiful provides litter sticks, gloves, trash bags, buckets, t-shirts, and signage to celebrate their contributions, and community members then report how many bags of debris they collect. In addition to litter collection results, the groups also report on other beautification efforts they made for that month (e.g. gardening, invasive plant removal etc.). This allows KCB to monitor the success of the program and apply for more funding to make the supplies continually available to residents so that they may care for their communities.

The tour group ascended the staircase, taking in the views until they reached Jackson Hill Park at the summit. They then snaked back down the hill via the Gage Street Steps to a community formerly known as Little Bethlehem, where Christian pointed out various paving types that have been used to construct right-of-way paths over time. The area had examples of everything from cobblestones to brick pavers to concrete and asphalt pavements.

Christian then guided the tour to a location which is not only significant in the history of the community, but also as part of the history of Spring in Our Steps. Currently closed for use, the Wendell Alley Stairway was the site at which Spring in Our Steps held its first event a decade ago, and it marks another significant event this year. The staircase, which had been previously closed due to public petition, is now going to be reopened thanks to the efforts of the community and Spring in Our Steps. The nonprofit recognized that although it is gated off, the stairway is still actively used by residents who climb over the barricade. To make it a safe connection once again, Spring in Our Steps worked with local residents and the City to petition to reopen the staircase and make improvements to it so that it may be accessible once more. It will be the first staircase under these circumstances to be reopened for use.

Circling back toward Over-the-Rhine, the tour stopped next at the intersection of the Rice Street Steps, Peete Street Steps, and Peete Alley, which marks another significant Spring in Our Steps project location. The organization is coordinating with the City of Cincinnati to restore the cobblestone alley to maintain the pedestrian connection from the quiet residential space to bustling Vine Street. This project will maintain a connection that allows residents to walk from the hillside to the historic Findlay Market and to cross Vine Street to access another network of staircases that ascend to the overlook at Bellevue Park. Christian explains the importance of these pathways to make urban living desirable and reduce the need for commuting by vehicle.

As the tour made its way to its final destination, they passed several buildings that Keep Cincinnati Beautiful has been involved in stabilizing. Alistair explained that the Arts Program “Future Blooms” at KCB transforms boarded up buildings and paints windows and doors in a trompe l’oeil style on them to not only beautify the streetscape, but make those buildings more secure to improve public safety, reduce blight, create visual interest and increase economic development within the neighborhood. Many of these buildings are prime for development with the advantage of being adjacent to the pedestrian connections that Spring in Our Steps is active in maintaining.

The tour made its final stop at an intersection of brick alleyways. Hust and Sharp Alleys are located next to the site of the former Hudepohl Brewery, razed for a surface lot in the 1960s, and its bottling plant counterpart, which remains standing today. The intersection showcases the historical use of such alleyways in Cincinnati. Here, Christian points out that the alleys are very much actively used by school children on their way to and from Rothenburg Academy. He also notes that one can see several examples of tenement housing, only accessible by alleyway. These housing structures served as affordable housing for the community of laborers who worked in manufacturing throughout the basin at places like the Hudepohl plant. Today, the structures are in disrepair, but Christian has a vision for using this infill strategy to maintain affordable housing and density in Over-the-Rhine. Rather than demolishing  them for parking garages, he envisions a series of structures that can provide units for the many service industry workers and low income families who would benefit from living downtown, close to both places of employment and public transportation amenities like Red Bike and the streetcar.

There are many ways to become involved in your local community to make an impact. Whether it be large or small, your efforts have the power to bring people together and improve their everyday experiences.

Spring in Our Steps 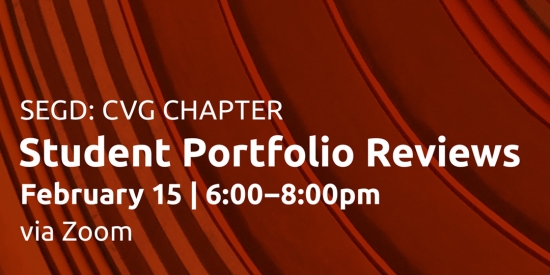 Design students! Want some low pressure, constructive dialogue with practicing designers and design educators? Back by popular demand, the SEGD Cincinnati Chapter is hosting virtual Zoom chats on Tuesday, February 15th. Students across disciplines with an interest in graphic design, EGD, exhibit design, wayfinding, and other related fields are encouraged to attend – bring a link or share-screen of your portfolio (in-progress or project excerpts are fine!), and any questions you may have about working in a design career. Reserve your free ticket today by signing up for a session time below. You will receive an email with a private link to log in.