END_OF_DOCUMENT_TOKEN_TO_BE_REPLACED

Hear from 6 industry professionals in design, fabrication, and digital media sharing the evolution of their process over the last year, and their thoughts on innovation for the future of design. 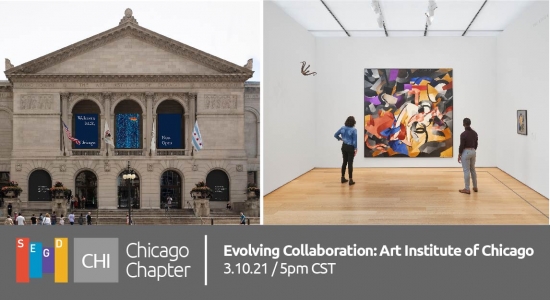 At the Art Institute of Chicago, architects and visual designers work together as part of the museum's Experience Design studio. Creative Directors Leticia Pardo and Kirsten Southwell will present on the evolving collaboration between their teams for designing exhibitions, reimagining permanent spaces, and crafting the brand and visitor experience for the museum.

Leticia Pardo, Creative Director of Exhibition Design at the Art Institute of Chicago, holds a BArch by the National Autonomous University of Mexico, and a Masters Degree in Interior Design by Pratt Institute. Prior to her role at AIC, Leticia was part of the Ralph Appelbaum Associates team in New York City, where she collaborated on the conceptualization of different museums such as the National Museum of Energy and Technology and the mining museum, Museo Ruta de Plata. In Mexico City, she was part of the exhibition design team at the Museo Universitario Arte Contemporáneo, and was part of the team developing the conception and inaugural project for the Centro Cultural Universitario Tlatelolco. Leticia has designed exhibitions for multiple institutions such as the Detroit Institute of Art, Museo Amparo, Museo Nacional de Arte, Museo del Objeto del Objeto and the Museo Nacional de la Revolución, in Mexico City.

Kirsten Southwell, Creative Director of Visual Design, attended North Carolina State University where she received her Bachelors in Graphic Design. Before joining the Art Institute of Chicago over five years ago as an Interaction Designer, Kirsten worked at Second Story Interactive Studios in Portland, Ore. where she did experience design work for institutions such as the World of Coca-Cola, the College Football Hall of Fame, and the National Archives.

Grab your lunch and join SEGD Chicago this Thursday  for a virtual presentation with Jan Lorenc, SEGD Gellow and founder of Lorenc + Yoo Design. Jan will present his insight after more than 42 years in the creative field, which is bound to be quite inspiring!

Jan Lorenc attended the Art Institute of Design at IIT where he received a BS in Industrial Design and MS in Visual Design. He worked for Peterson Associates, an offshoot of Unimark, where he design the logo and signage guidelines for Target Stores, which are used to this day. He established Lorenc+Yoo  Design in 1978 in Chicago. The company initially undertook industrial design projects, and later began work on large scale signage. In the mid 1990s, the firm moved into exhibits, interiors, and architecture. The firm has worked in Korea, UAE, Qatar, Saudi Arabia, India, and Japan. Currently, half of their work is in China, where it creates the vision and design for brand new towns.

After registering, you will receive a confirmation email containing information about joining the meeting.

Join us for some festive fun December 5. Shive Hattery will host us with seasonal cocktails and light fare in their newly renovated studio beginning at 5:30pm. Each guest will have the opportunity to make a custom wreath with the guidance of our friends at Variegated Designs.