Chicago—Earlier today, John Lutz nearly announced his candidacy to assumed billions of Internet viewers and his purported Facebook friends: “My name is John Lutz and I’m announcing my candidacy because I’m #goingsomewhere”. An elderly relative was reported as saying, “I’m glad he’s going somewhere. I’d like my basement back.”

Lutz takes what he calls a zero-controversy stance, hoping to offend the fewest people possible and least of all himself. Lutz prides himself on his ability to be PC, even when experiencing road rage, which he prefers to call Traffic Induced Tension, though he does not appreciate titters at the acronym for this dangerous condition.

This sort of caring and thoughtfulness goes hand in hand with his pan-partisan approach, which has been criticized by those more partisan as slippery and somewhat vague. “He doesn’t seem to address the issues at hand, if he’s the guy I’m thinking of,” says an unnamed pundit.

Lutz responds to such comments by reminding voters that he is an American, and was born in the United States.

Rumor has it that Lutz will be meeting potential supporters at Design Improv, a featured event at the upcoming SEGD Conference in Chicago. However, due to his political stance, he will not confirm or deny any public appearances. 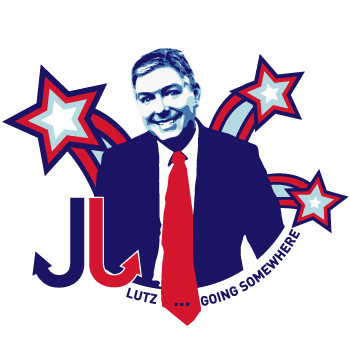