Signage Requirements in the 2010 Standards for Accessible Design.

The Americans with Disabilities Act (ADA), the enabling legislation, was signed into law by President George H. Bush on July 26, 1990. Its purpose was to make illegal any discrimination against the disabled in access to goods, services, and employment. Its supporting technical guidelines, the Americans with Disabilities Act Accessibility Guidelines (ADAAG), were issued on July 26, 1991, and were made effective on January 26, 1992.

The ADA is an extension of the landmark 1964 Civil Rights Act that made it illegal to discriminate against any person on the basis of race, religion, sex, national origin, and other characteristics. Much of the language of the ADA reflects the original 1964 Act.

The language of the ADA law is very clear when it places responsibility for conformance to the law very firmly on the owner of the project. Designers, manufacturers, and others who act as agents of the project owner must be knowledgeable in the detailed aspects of the accessibility guidelines as part of their responsibility to the owner.

Although the ADA and ADAAG profoundly affect sites and buildings in the United States, neither document was conceived as a “national building code.” Rather, they represent something new in American jurisprudence, the application of civil rights statutes to the built environment. Therein lies the confusion that still exists regarding exactly how the requirements are applied.

The updated ADAAG (called the Standards for Accessible Design, or SAD) were effective on March 15, 2011, for the construction and alteration of facilities covered by the ADA, including places of public accommodation, commercial facilities, and state and local government facilities. These new requirements represent the first major change to the technical guidelines. They will most likely be the format and base content for years to come.

When the Department of Justice released SAD, it gave additional guidance on when projects still under design are required to follow the new standards. Refer to Chapter 5.0, Frequently Asked Questions, for this information.

Airports, train stations, and bus depots covered by the Department of Transportation and Federal property governed by the General Services Administration or the Department of Defense have already adopted the SAD and have been following them for several years.

The SAD includes substantial changes and additions to the requirements for accessible signage. The signage section is significantly longer than in the 1991 ADAAG.

The purpose of the SEGD 2012 ADA White Paper Update is to help the EGD community meet the spirit and intent of the new SAD guidelines. 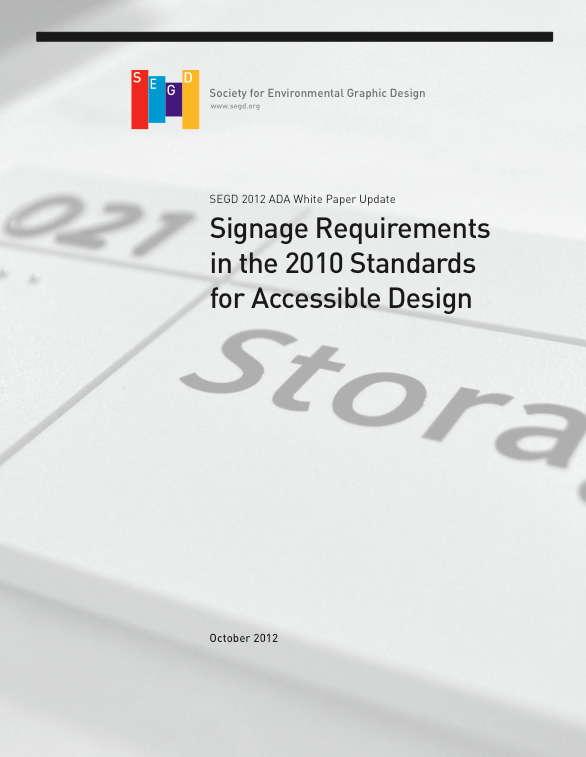